It's Been AGES!! Let's Catch Up

It's been over a year since I sat down and actually put my brain to work writing a post! I'm not sure I even know how to blog anymore, but here goes.

Since we last met not a whole lot has gone on with our home remodel. We decided that taking a break and paying off our bills would be in our best interest and so, unfortunately, all remodel work was put to a standstill (of course we decided that while the master bath was demolished!). Now that we are feeling comfortable with where we're at, we are back in full swing!

Here's a recap of where we left off.

Stella's room is still in progress (even though she's almost 18 months old) however, much closer to being done. Last you saw the golden herringbone wall was finished and a little peak of the closet and custom nursery art . Since then, the room has come a bit further and has two projects or so until it's finished. I'm searching for the perfect wall decal for the closet and, of course, I can't make a final decision. Hopefully that will come to pass sooner than later. If you follow along on my Instagram you will have seen a few other progress pictures including my custom changing pad, a hand embroidered pillow, our reupholstered nursery chair, and a few other tidbits.

But WAIT! There's a wrench that could be thrown into this whole nursery project. If you missed the announcement on Instagram, here's a reminder... 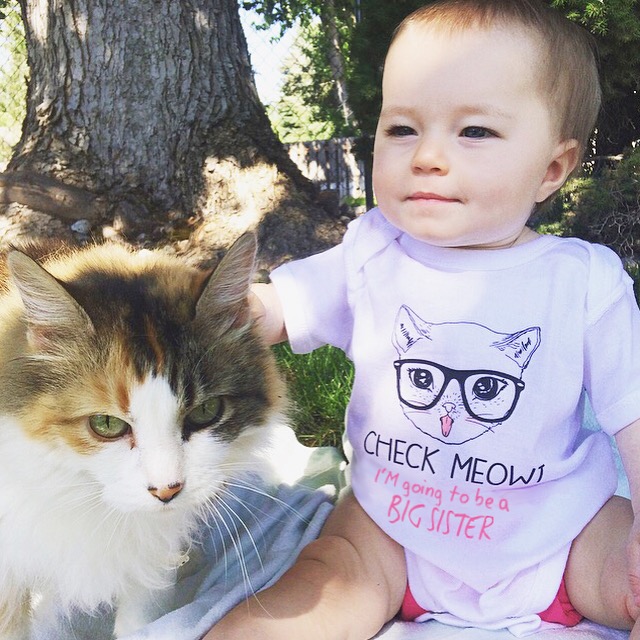 We are now only weeks away from welcoming the next addition to our family. Here's the kicker...we don't know if it's a boy or a girl. So, what does that mean for the nursery? One of two things. One...if it's a girl, the room will most likely stay pretty much exactly the same, except for a garland name change (project teaser!). Two...if it's a boy (yikes!) things will definitely have to change! Most of the basics will stay the same, i.e. the crib, fauxdenza, herringbone wall, etc. As for the rest of the room? Well, we've decided to jump that hurdle when we come to it.

There will have to be a lot of shuffling around of kids soon after the baby comes so we're able to move baby into the nursery and Stella into a big kid room. That, of course, will mean more projects and some creative rearranging.

We last left you with the re-refinish of the avocado bathtub. Since then the only place the guest bath has gone is down. The bathtub in no time started chipping and is now looking a right mess. 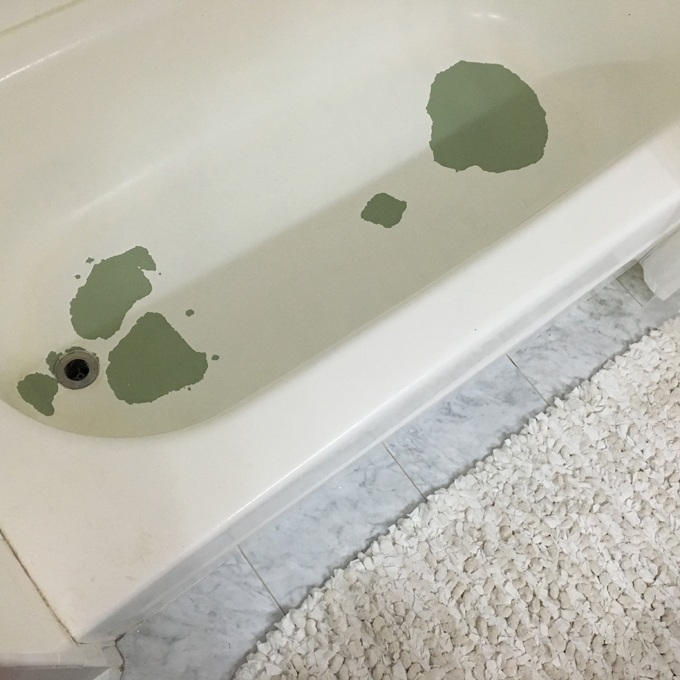 Needless to say, I can't really recommend any DIY spray product for your bathtub. If you want your tub to be sprayed (and to last) I would go the professional route.

The peel and stick tile has held up ok but the grout has started cracking in several places. I blame this mainly on the fact that we didn't put it on the best of underlayment (the old linoleum). We knew it was pretty temporary so we weren't too concerned with putting in more effort than we needed to. The guest bath is slated to be officially remodeled right after the master bath is finished.

This was the saddest room of all. When we moved into our house the master bath was barely functional. The shower completely unusable. So three years ago (yes three, almost exactly) we tore out the walls and old shower and were getting ready to remodel the bathroom.

After replacing a small patch of rotted subfloor we had a new shower pan installed and prep work began for tile.

That's when it all got put on hold and how our bathroom has sat since. Down to the studs and 100% non-functioning (well, it made for good storage).

More than any other room in the the house this is the one I have desperately pined over having finished. I wish we would have waiting to tear it all apart before we decided to put all remodel projects on hold but I suppose hindsight is 20/20.

Now that we are back to remodeling, the master bath was first on the list of course (especially with new baby coming).

Design plans for the master bath are pretty similar to the original mood board I put together ages ago, but there are some changes. The main light for the bath will now be this show stopper from Cedar and Moss. The tile for the floor will remain a marble basket weave, however the walls of the shower we've decided will be a 4x16 white tile set in a herringbone pattern instead of the traditional 3x6 subway tile (which will be in the guest bath instead). 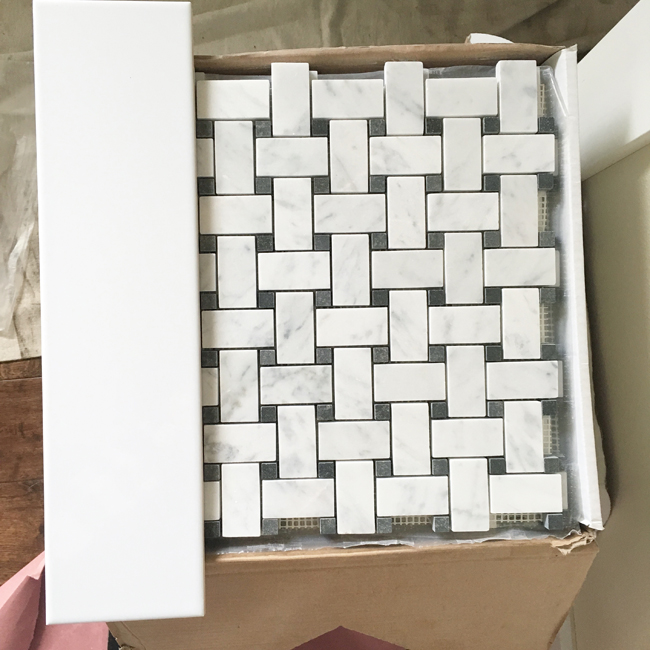 Slight changes to the vanity and medicine cabinet are also taking place but aren't too far from the original plan.

So this is where we sit now...the final prep work for tile is about finished and the install begins in a day or two. 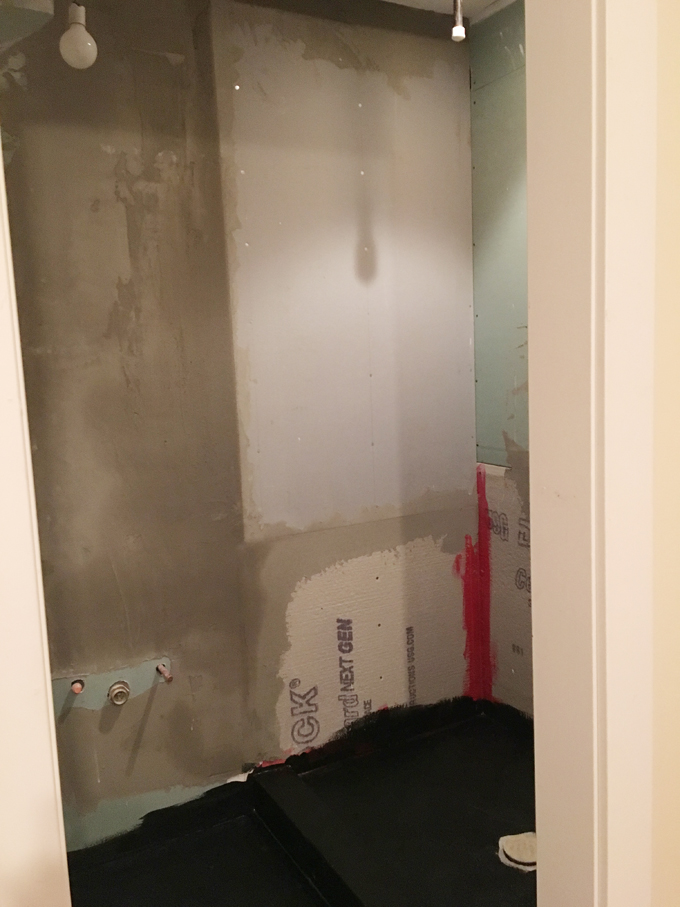 Now let's chat a minute about the master bedroom...

It's a total disaster/in progress/work space right now. We pulled most everything out to prep it for paint and other things, but decided to let the tile guy use it as his work space until the bathroom is done since, in theory, if the work space is closer the job will get done faster (fingers crossed). And yes, that means we are currently "living" in our living room. 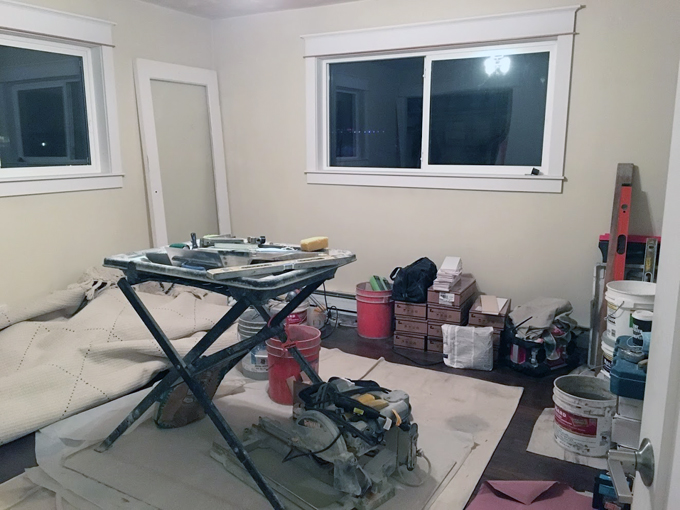 We'll have to put ourselves into high gear to finish our bedroom once the bathroom is done and the tile man has moved out. The problem? We'll only have about a week to finish it all up before we have a new baby on our hands. That includes sanding/caulking trim, planking the ceiling, painting every surface and 4 interior doors, along with other small projects to pull it all together.

Let's not even talk about the fact that we are also taking on the demo of the other two bathrooms ourselves while all of this is happening.

Will it all get done on time? If I'm being honest...no, I don't think it will. But maybe we'll surprise ourselves!

Now that you're filled in with the current goings on, I'll leave you 'till another day. Keep an eye on Instagram for more updates!