To Spray or Not to Spray...A Bathtub that Is

The bathroom remodel it still in paint mode, so today I'm going to discuss my experience with refinishing our bathtub.

When we decided that we wanted to remodel our bathroom, but on a very tight budget, it meant we could not replace our tub, which would have meant replacing all of our tile as well.  So I found a product to refinish the tub instead.

Originally the product I found online was Rustoleum's Tub and Tile Refinishing Kit (which has great reviews) but they did not carry it anywhere local in stock.  We wanted to start our tub next day, so we picked up whatever our local hardware store had.  That product was Homax Tub and Sink Refinishing Kit. (which I found out later only has mediocre reviews).

While at the store there were two options for this product, a spray on or a paint on.  I figured that the spray would give the best finish, so that's what we went with, even though it was a bit more expensive.  We bought two boxes knowing that we were doing the bathtub and the tile around the tub. (One box is supposed to be enough to cover one standard bathtub.)

My experience with the spray is not a very good one.

First off let's reminisce what our bathtub looked like before. 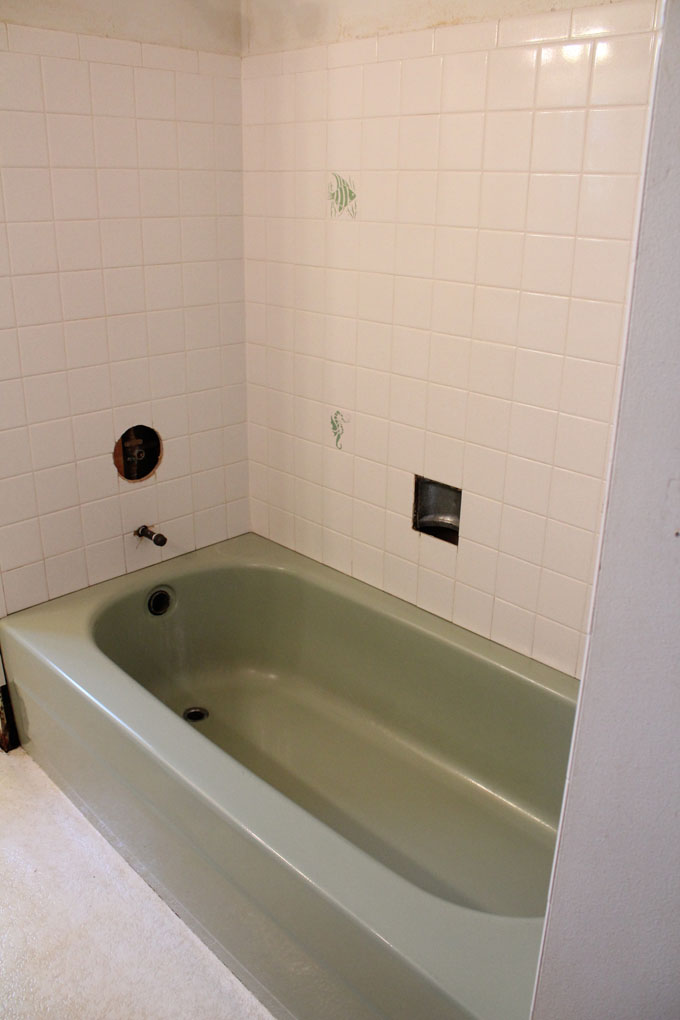 And the tiles were covered in this... 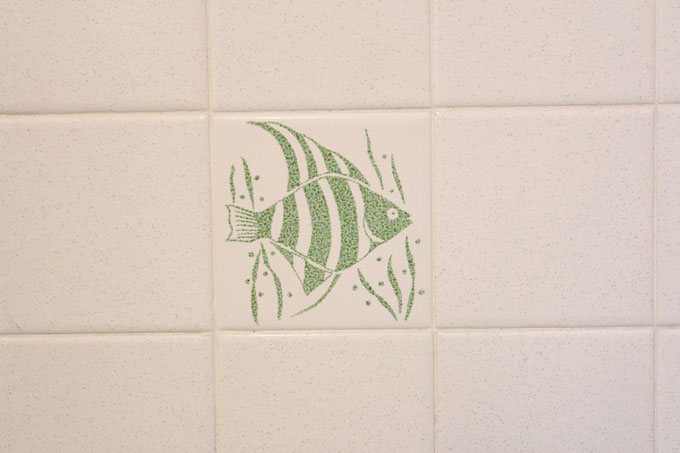 The process begins by cleaning everything with a powder solution, provided in the kit, that you mix with water, then rubbing everything with steel wool, which is also provided, then repeating that process three times.  From there you mask everything off (we removed all of our caulk and fixtures but it is not necessary). 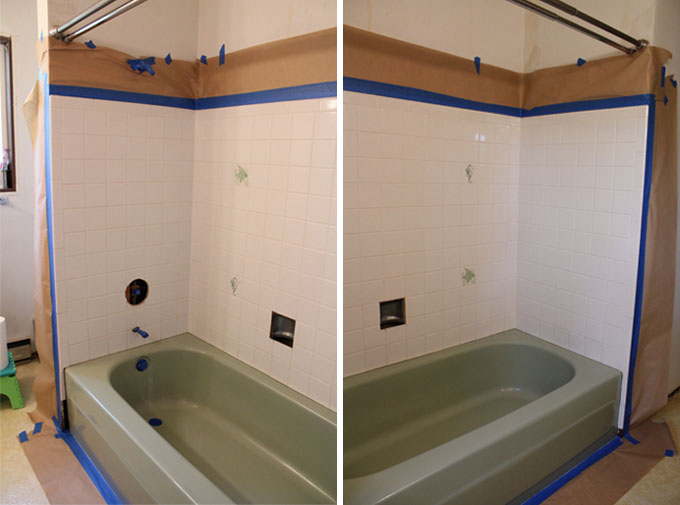 This is where I learned my very big first lesson with this stuff.  This is not even CLOSE to enough masking off.  Pretty much anything that you value do not have uncovered (our screwdriver will never be the same).  The spray on this stuff goes everywhere.  Our hallway was coated with spray dust, as well as our bedroom that is down the hallway.  The unfortunate thing about this is that the dust doesn't just sweep up.  It sticks like no other and has to actually be wiped off (such a pain).

Side Note:  At first I sprayed this while wearing sandals and my feet were caked for days with it (it also ruined my sandals, my bad).

This is also where I learned that a basic face mask was not going to cut it.  The fumes on this spray are horrendous!  So I switched to a respirator and full safety goggles.

After the first coat of spray this is what the tub and tile looked like. 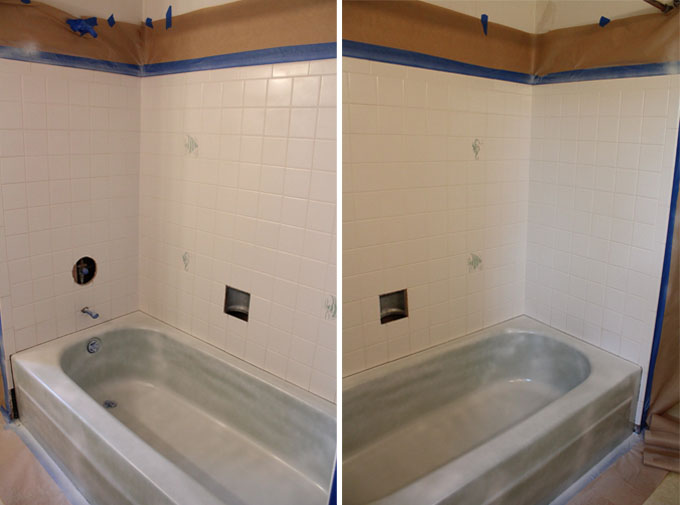 The directions on the product state that two coats of spray is all you should need and that a third coat is not recommended.

This statement is severely flawed.  Two coats didn't even come close to covering everything that needed to be covered.  I'm not sure why they think two will be enough...if I sprayed any closer it would start to run and drip, but staying further away meant lighter coverage which resulted in several, much needed, re-coats.

So, about 4 sprays later (and having to buy another box since two boxes weren't enough) we finally got to this. 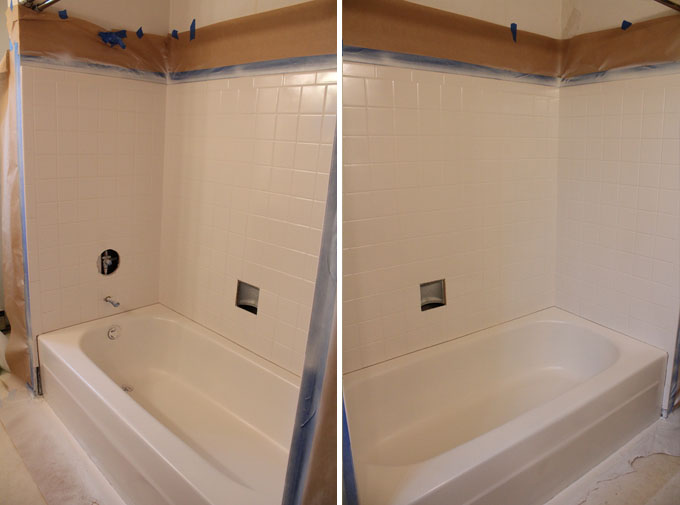 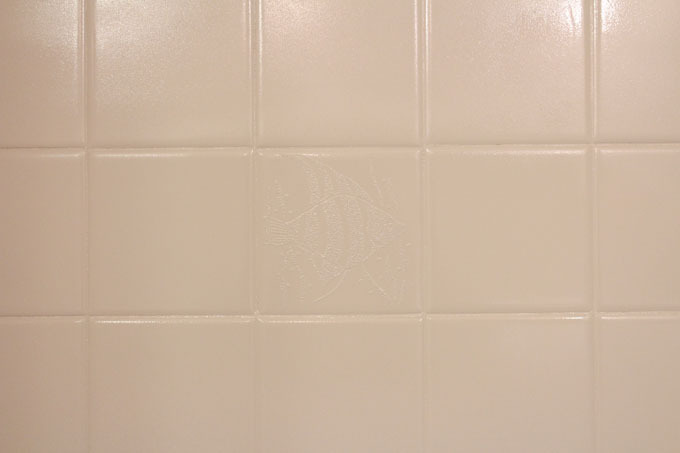 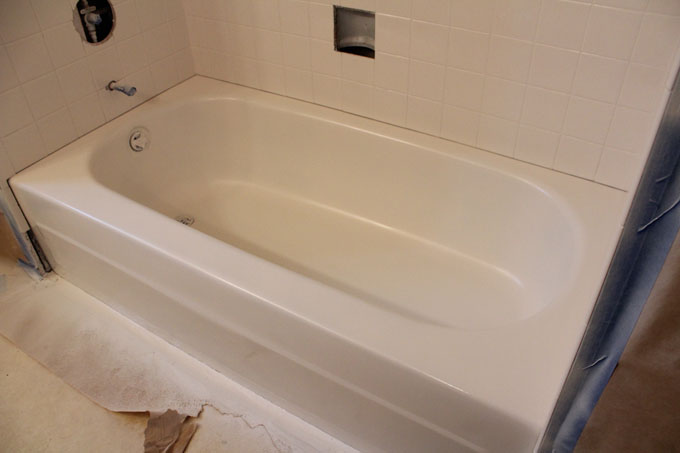 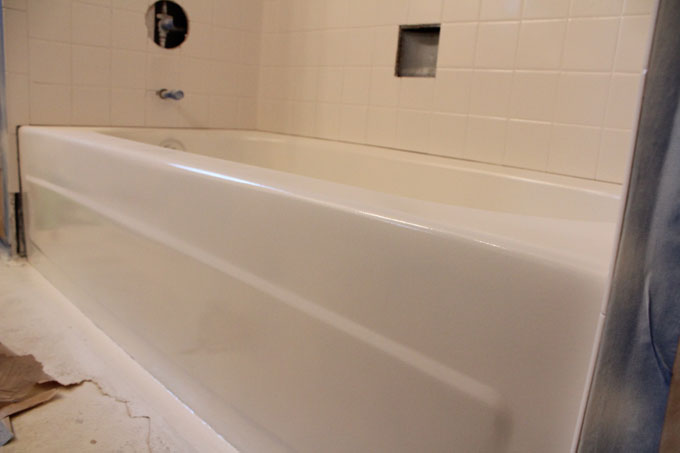 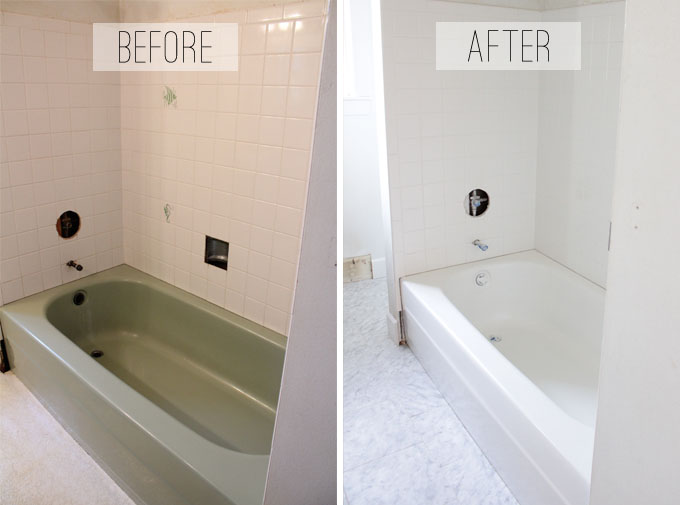 A few things about the finished product.  First off, yes, it does look 1000 times better than before. However, after 4 coats I still feel like I can see a little color in some places.  Second, the finish on the vertical surfaces is relatively glossy (like the product claims it should be) but is dull on all of the horizontal surfaces. Third, even the glossy places are splotchy glossy and the gloss itself isn't really all that glossy (wow, does that even make sense?).  Fourth, the white is not very bright white and almost looks ivory in low light.

Lastly, after reading the reviews about this product I had huge concerns about the stability of it.  Many people said it would chip after a few weeks.  So, per other reviews, we let the paint cure for 5 days instead of the recommended 72 hours.

Unfortunately, even after the five days, some silly mom sat on the tub with buttons on her pants pockets and chipped a piece off. (Way to go MOM!)  I was so mad when I saw what I did.  At least it's in a place where it will never really be seen because of shower curtains.  BUT, that gives me worry for what my kids are going to do to this tub.  They aren't exactly sitting with their arms folded while taking a bath you know.

If I were to do this again (and I would definitely do it again) there are a few things I would do differently.  I would use the other brand with the great reviews and I would use the paint instead of the spray for multiple reasons.  One, there is minimal masking and NO OVERSPRAY.  I also think the brush/roll on will give a better finish overall. (I only think this because in one small spot I used a brush after I sprayed and it is by far much more glossy and tile like than anywhere else.)

So, even though my experience with the spray wasn't a good one, the cost and time savings was still worth it.  We may eventually have to redo this tub, but at least I'll know exactly what to do next time.

UPDATE:  See what happened next with our bathtub!

I share a similar experience. I went to Home Depot to purchase the Rustoleum tub kit. We found out it had to be purchased online so I got the Homex product instead. I did use the brush paint in version. I'm happy with the coverage and look. We took extreme care in following directions to the tee. Nearly 3 weeks later the product hasn't fully dried plus it pulls up easily. Now I'm going to touch up any areas damaged by touch. If I had to go back I would have waited and purchased the product with great reviews! I feel like we're never going to be able to use the main bath:-(

LOVED it! Hope your screwdriver is doing better! :-). I have tried the brush, and my experience was that it almost always leaves striations. You see stroke patterns. As well as increase your drippage... So yeah while it may cost a bit more, you leave with a better finished product. Thank so much for the masking tip...I WILL DO!! Your tub looks great. You can always add a gloss coat for that extra glossiness you want to achieve (altho I know the point was you shouldnt have to and I agree). Thanks for your story and pics!

Be sure the check out my updates on our bathtub and how I feel about it now! Update 1 and update 2.

do you need to re-grout first if there are cracks? I assume yes. Then how long do you wait after to paint over? Does this mean there will never be any need to re-grout after all this? How long is this good for?

thanks for taking the time to write this up - great tips......better forewarned :-)

I recently did the same project with the Homax spray and had similar results after the first kit didn't achieve the expected coverage, and the overspray and fumes were unbearable; so I went out and bought the Homax brush-on kit to "finish" the job.

I do NOT recommend the brush-on kit. The epoxy doesn't stick to the brush, so there is little to no control while you move from the can to the surface. It dripped everywhere. The dripping was far worse than anything I experienced from the spray being applied to close.

It took me more than an hour to do a 3-by-12 (tiles, not feet) section of the shower stall. It did apply thicker and more glossy, but it never leveled out smoothly and you could still see the brush strokes after five days of curing at 72 degrees.

I was so disappointed and frustrated with the brush-on kit, I took the unused portion back to the store and got a refund. Then I bought another spray-on kit to finish the job for real this time. I bought the appropriate NIOSH mask, closed the door and finished as quickly as possible, (about an hour of spraying to finish the entire stall).

It looks good despite the smell and overspray cleanup. I'm also curious to see how long it holds up.

six years ago i did my sons bathroom got two kits [homess] Im a journeyman painter.came up short and e.p.a.had pulled them off h.depots shelves and after reformulation it didnt match the color. $300 later resperator, laquer,masking,...It was h.d. saying e.p.a. took the good stuff out.I told mgr I work the largest homebuilder in the nation.Have nation wide acct and every rep gets a lowes and H.D.card.spent 10,000 a month and this is my personal home Got a divorce over the worst product ive ever used.

Thanks for sharing your experience!

Oh my god. Didn't you read the directions ...its says to make a tent and use a respiratory and long sleeves ...i guess you didn't think it through , I use it and mine came out perfect ..i wonder how many of the people complaining did it wrong ..how they made sure for 72hrs that it was between 75 and 85 degrees with humidity less then 55 percent...if you don't own a humidifier then should you shouldn't bother, if something's worth doing , it's worth doing right ..pay someone next time

Hi Mike, I'm glad this product worked for you. Unfotrunaltey for us it wasn't just the fumes and clean up that was the problem (even if we had followed directions exactly) the coverage for us was incredibly lacking and the adheseion as well (even following the directions exactly). If you read my follow up posts about painting your own tub you'll see that my advice is the same as yours...pay someone to do it.

Looks like this is a propoganda station for rustoleum....which i love but really

Hi Bob. This post is not sponsored by rustoleum in any way. This is purely our personal opinion based on the different products we used and we received no compesation for it. Rustoleum just came out ahead of the competition in this instance.

I'm sorry to hear about your experience. I know this is an older post, so maybe they've changed things since. But, after having used Rustoleum's brush on finish years ago (awesome results btw), I just used Homax's spray on. My results are beautiful. I did my sink, taped it off to make it appear as a drop in sink. I'm going to paint the countertop now and then tackle the shower. For me, the hardest part is making sure to put plastic up - everywhere. I made a tent of sorts over the area that I was working, and had no problems with overspray. The finish looks amazing. I think they've changed something or there was a problem in your prep.

I bought this product, unfortunately mine had the spray "drip mark spots." Plus, it seems still "chalky" after 24 hours. Not sure if it was the can or what? My question is can I place the paint one over the spray? Now, after reading all of these comments I wish I would've waited to buy the Rustoleum online. ;(